The last month of the year has come and many special events such as Christmas and New Year! It's time to remember everything about this year and think of your plans for 2020 that will be a year of a lot of fun and good things !!
In this update, we will be bringing everything that celebrates this special date that is Christmas, as well as special items to celebrate the New Year with everything.

Lothos has prepared a surprise for our warriors after a whole year of hard work, but it seems that an old enemy has decided to return and spoil Grand Chase's Christmas.

The Santamon Judgment is a simple and light mission geared toward the Christmas atmosphere. Defeat Santamon for themed prizes, including the Christmas Spirit Visual Pack and Santamon's Gift, a high-gain EXP-focused title to aid your level 90 journey!

Let's get into the Christmas mood and throw some snowballs at our battle mates?

Check out the mini-event and win several awards, including the exclusive Toony Dog pet and his Toony Rudolph skin. 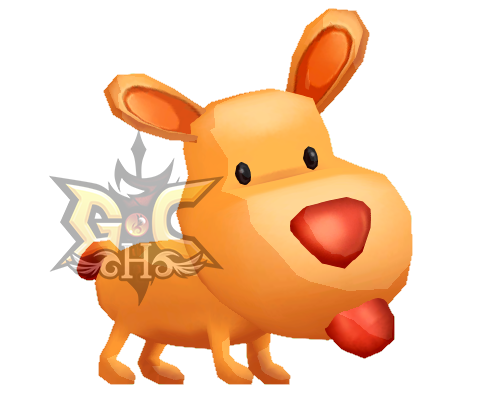 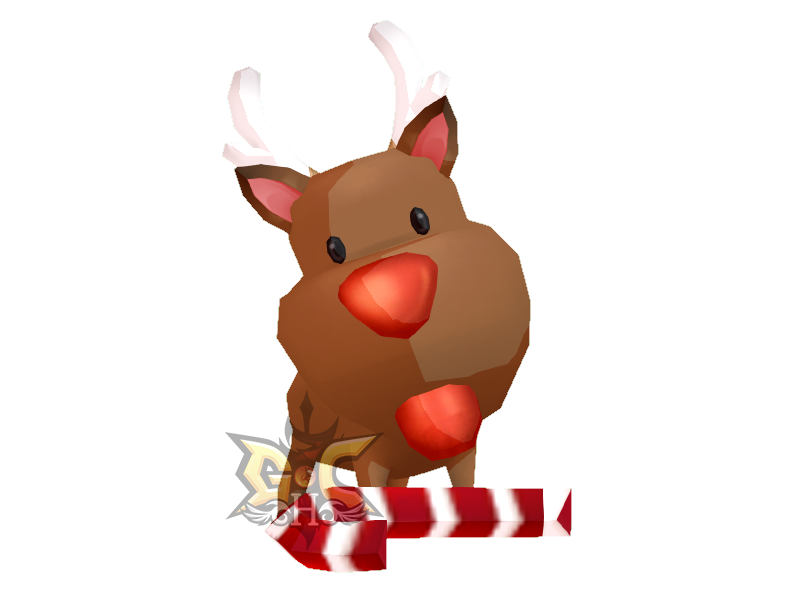 Toony Dog in his Rudolph skin.

The Christmas Socks event returns on our server!

In this event you will hang your socks on the Christmas tree to get gifts after the time stipulated by each sock. You can get them through our new exclusive Santamon Christmas Judgment mission.

Misty needs your help arranging the residence and leaving it in Christmas mood to receive Santa. She promises to give you great prizes in exchange for your help. She will give you a quest: collect the items requested by her to enter special mode. To deliver items to Misty just press the spacebar. Hit the up arrow to get rid of unwanted items. You will receive one coin every 30 minutes! Buy currency multiplier in our CASH store, you will get double during the day.

Our dear Mari has a new research to be done, you can help her research and win the new exclusive Sirioth Spirit of Dawn and Sirius Spirit of Dusk Skins! Plus, both skins have an effect on the mascot's ability to make them even more amazing!!

Check out the skins below with their new effects on ability: 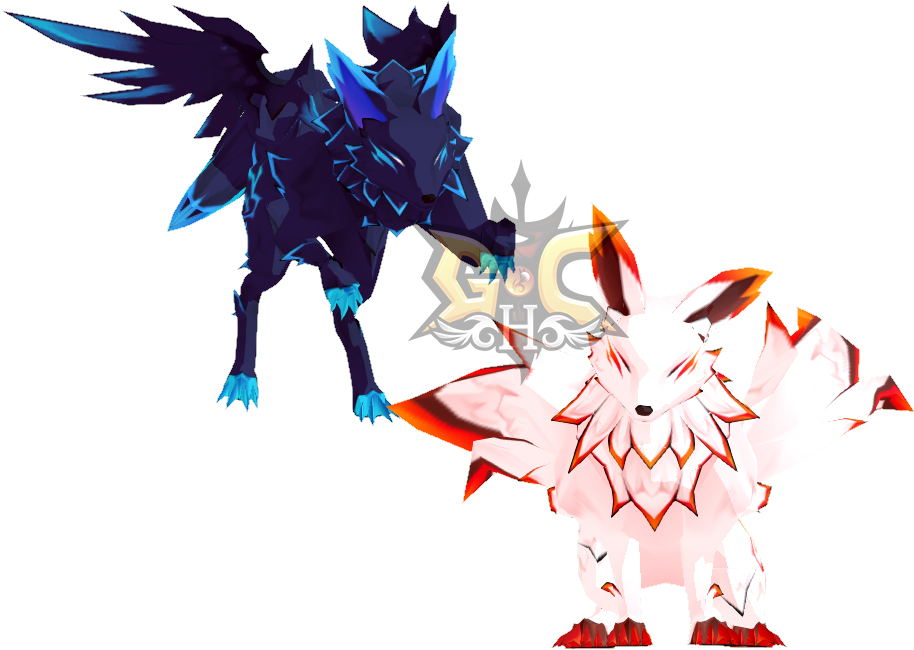 In addition to the Elven Forest themed update, the Christmas Tower map also returns this month for you to challenge your opponents! Break Snowman mode has also returned! Who will be faster and be able to destroy the snowman first?

The Daily Seal returns to the server towards 2020! Check out the prizes available during 10 days of Seal! 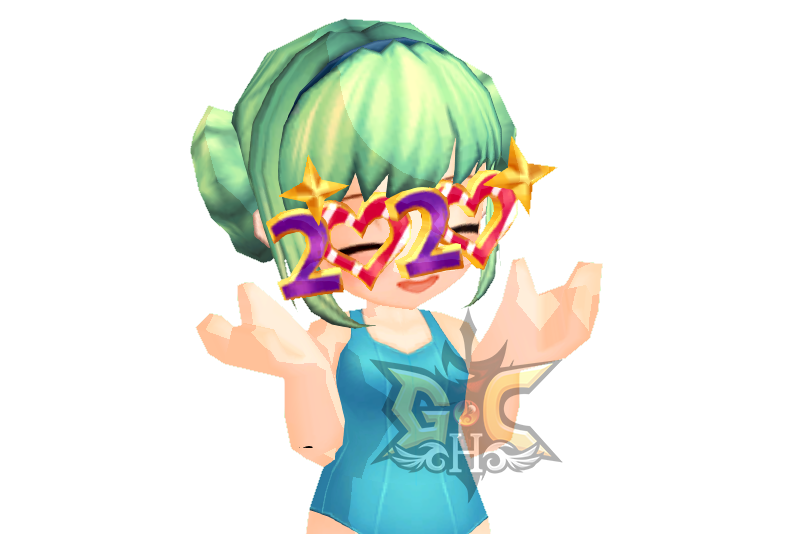 Birthdays of the Month

Rufus is part of a Haros tribe family whose members have always acted as guardians of the Underworld. As a child, his father was a famous Bounty Hunter, the warriors responsible for stopping the shadowy beings who might escape Hades. To Rufus, he was the greatest hero in the world and the model in which he mirrored all his dreams.

Part of his past is still a mystery precisely because Zero doesn't usually talk about him. The boy seems to know about special abilities that are unique of the Sieghart family.
Extremely modest, Zero seems to have no purpose of his own but to follow the designs of his sword. And if there's one thing Grandark wants with all his might, it's to destroy his rival, the magic sword Eclipse, wielded by the Asmodian Duel.

Born in Silverland, Jin has always been a hardworking and brave boy. Early on he began his martial arts training to join the Order of the Silver Knights, the elite fighting group that protected the Silver Land.
Unfortunately, a terrible evil fell upon his nation, utterly corrupting the land, and leading its knights to a tragic end. As the last survivor of the Silver Knights, Jin vowed to restore the honor of his party, and teamed up with Grand Chase to destroy the evil that had attacked his homeland.

Lire is a young elf who lived on the secluded island of Eryuell, home to the elves who have distanced themselves from the troubles and conflicts of the mainland of Bermiash. Despite being known for their combat skills, the Eryuell Elves retained their pacifist nature, avoiding involvement in human affairs. However, as the war raged across the continent, the elven elders decided to intervene, as the evil of Kazeaje threatened to strike even the forests in which they lived. To investigate the advance of the dark forces, they sent young Lire to join the newly formed Grand Chase elite group.

To celebrate our heroes month, when playing with Lire, Jin, Zero or Rufus, you will receive a 2x EXP / GP bonus! This bonus is for the entire room as long as one of the players is using one of these heroes. 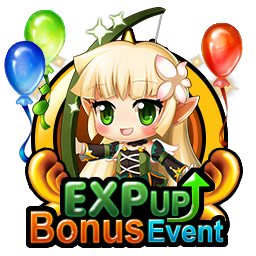 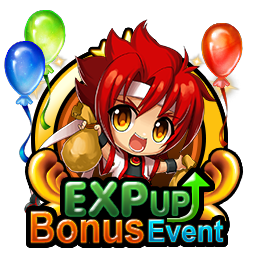 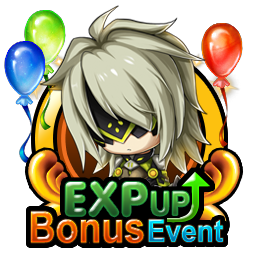 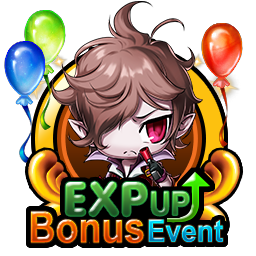 Plus, you can celebrate using a Flag and/or Cushion from our heroes!
Both are available for creation in the Forge for 10 Epic Essences each!

The following items will also be available for purchase at the CASH Store:

The Awarded Donation returns to the server on this special date, and along with the cash and its bonuses, players will also receive various items for their donation to the server, containing a unique set of the Christmas Eve Visual Package and also the Exclusive Skin of the pet Keter: Winter Spirit that has received a new effect on your ability !!

Check out the table below to see all the prizes available for each Tier and the new effect on Keter's Christmas Spirit ability!

Attention: You will only receive the awards of the chosen values and only once. 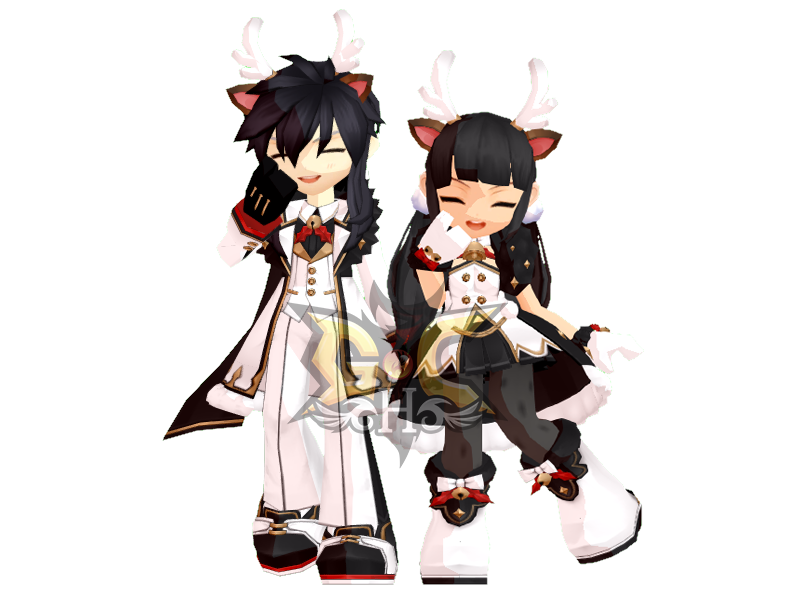 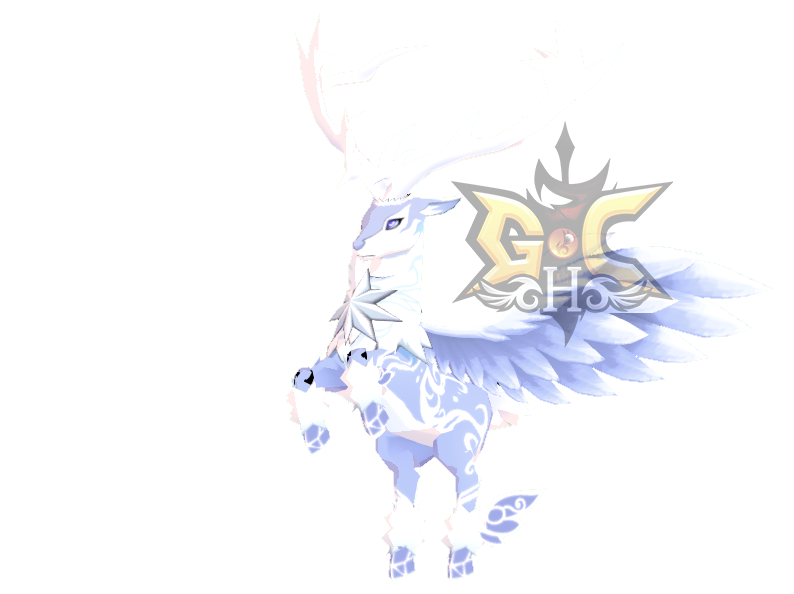 Keter in its Winter Spirit skin.

The VIP System has received a new update and is packed with amazing items!

Celebrate this holiday season like a cherry blossom! Nothing better than spending New Year's Eve wearing a pink and white costume to rock during the fireworks, isn't it? With the Radiant Flower visual package there is no season when the flowers will stop blooming! But don't walk around alone, the cunning archer Bloomy is ready to help you on your adventures with its piercing petals!

See the list below for rewards enabled in each tier:

By equipping Radiant Flower Stompers you will enable a special pose in dungeon room! Relax and enjoy the moment in this delicate flower garden.

Warning: Fusing the stompers with another coordi equipment will cause the room effect to be lost!


Video is only demonstrative and does not represent damage and MP recovery amount as both differ depending on player status. The pet also recovers AP and works similarly to Selion, the more monsters, the higher the AP recovery.

Our comrades were enjoying Christmas at Ernas when they had to pause to stop an old enemy who is always trying to ruin everyone's Christmas. After defeating him, the Grand Chase went to enjoy Christmas in different ways.

Some of our dear Grand Chase members have gone fishing ... The Penguin Visual Pack, plus the Classic Reindeer and Snow Reindeer Visual Packs, plus our dear Lulu Visual Pack! 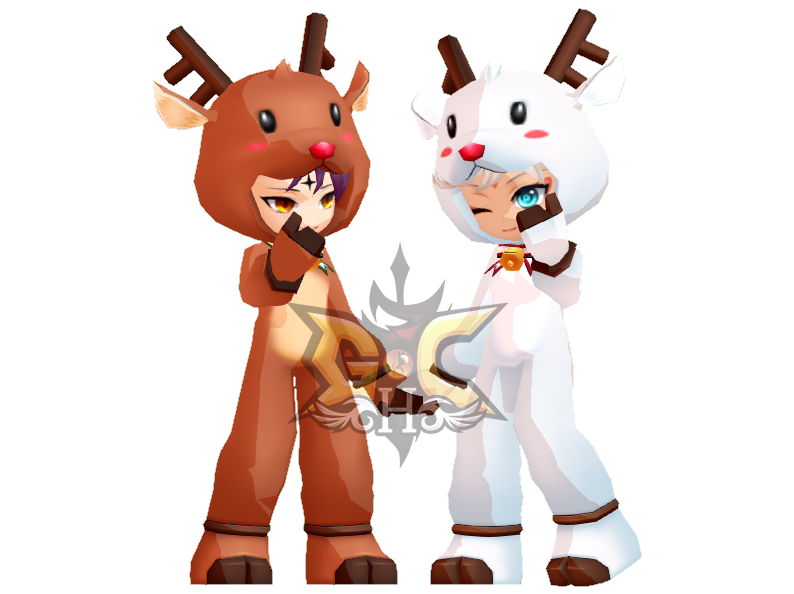 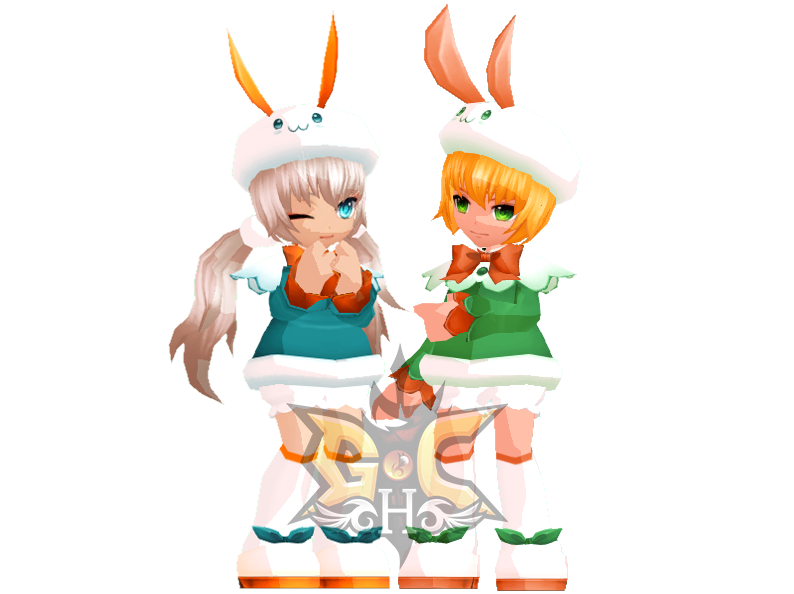 You're not feeling the white colors in your heart this holiday season? Don't worry, some flowers also have thorns. With the Faded Flower visual package you will awaken the darkest in the bloom of a flower. And Bloomy won't leave you behind! The faithful archer will also follow you on your way to the dark flowering with [SKIN] Faded Bloomy!

By equipping Faded Flower Stompers you will enable a special dungeon room pose! Relax and enjoy the moment in this shady flower garden.

Faded Flower Coordi Set for Rufus and Rin and Faded Skin for Bloomy.

Warning: Fusing the stompers with another coordi equipment will cause the room effect to be lost!

The Super Rewards System received a more themed spin this month to get you in the Christmas mood! Check out the packages available for this month! 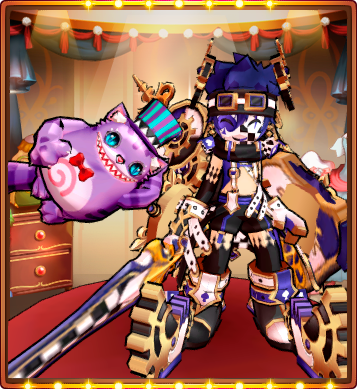 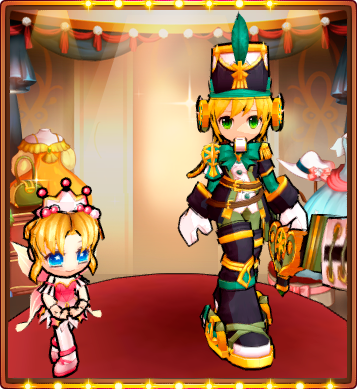 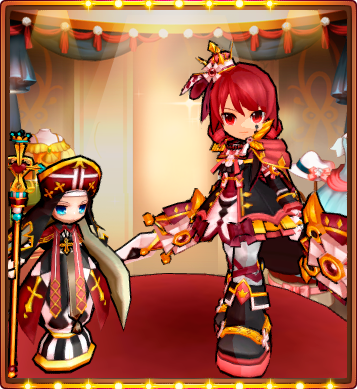 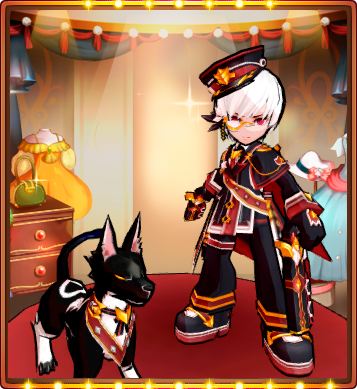 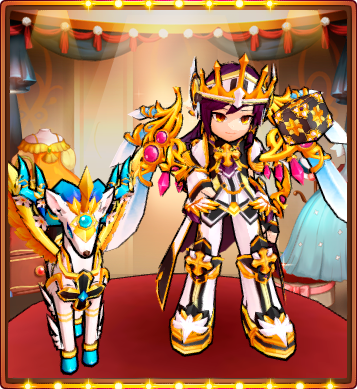 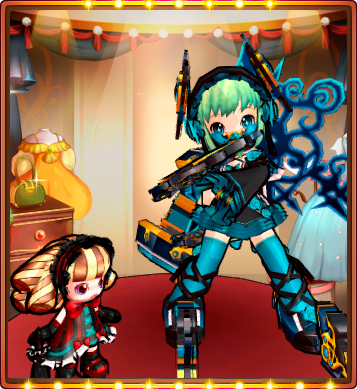 Our Cash shop has been updated in Christmas weather!

The Hero's Shop couldn't be left out of this update, could it? Check out the news below! 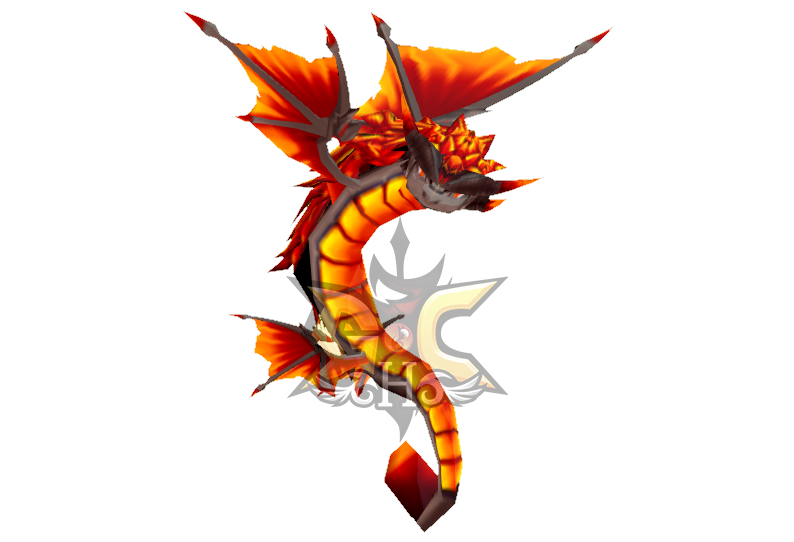 Bakunawa also received a new attack! It's available at the CASH Store!

At Forge all items that can be created via Santamon's mission drops, as well as Natalin themed accessories and packages has been added. There are also new Christmas themed pet skins coming up in the area! Check out the new Christmas Blu skin, Gum Lino and the return of Christmas Lulu! 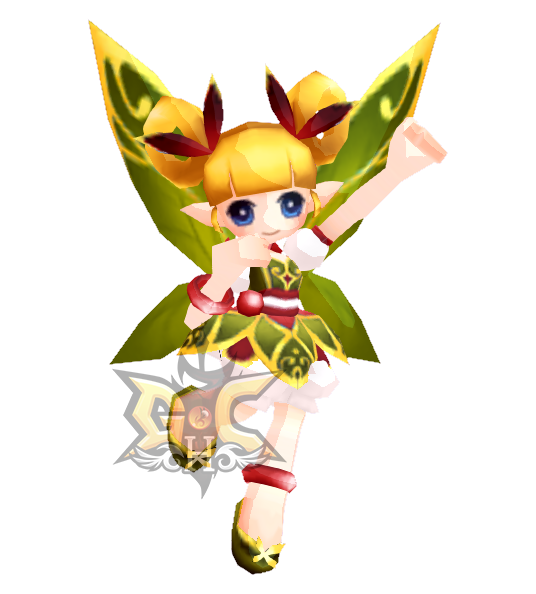 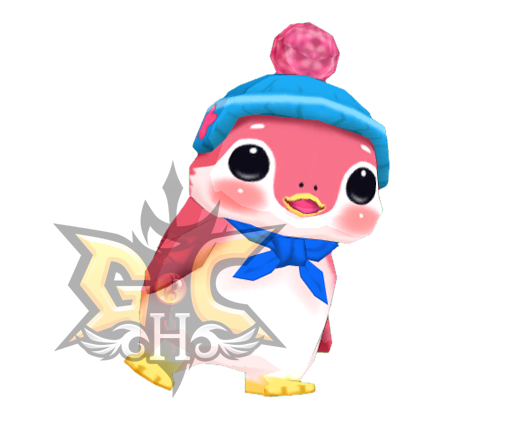 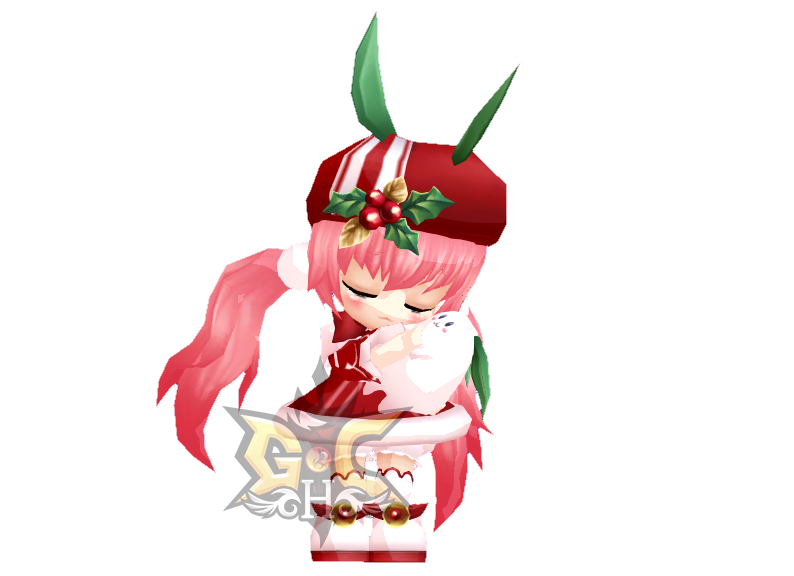 Move the bar to view the difference:

Special thanks to the participants of this update who worked hard to get it done!

Translated by @Vinisims. Have a nice holiday season!