Greetings world of ernas, i hope everyone is doing well. We meet again and now we're ready to announce another update with wonderfull content. We have a special team working at 200% to make everything about the content of May update ready. So we brought novelties, adorable rewards systems (and the new mascot), special events and the mission event that everyone loves URIA! Enjoy all the events and new packages availabre at the k-ching shop, Lucky Gacha Fortune, Gacha Pon, Craft and History VIP Rewards.

The Extermination of Uria

After a long time - and what time, huh? Uno and Glimmers of Uria return to the world of Grand Chase with an immense thirst for blood ready to take revenge on those who underestimated them. They will use all their evil powers of destruction to cause chaos and destruction in Uria.

Check below the tables of possible rewards and their respective difficulties: 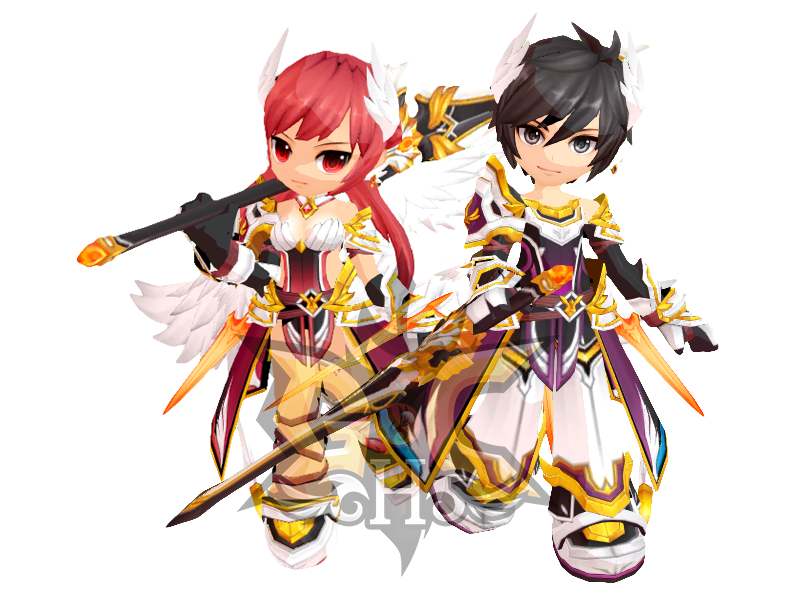 Package, accessories and weapons from Guardião Eterno for Elesis and Sieghart, respectively.

Rings that can be created
Remember that only level 1 is dropable.

Birthday of the Month

This month we will have two magnificent birthdays. On one side, the most beloved and fluffy druid of all. Ryan is a very gentle elf who loves to help others, as well as protecting the forest and the beings that inhabited it. Orphan, he grew up alone living beside the animals, until he was adopted by the druid Satyr, who trained him in the Order of Druids. On the other side, we have the most wise and agile warrior among the other characters. Mysterious, reserved and extremely rational, Asin is one of the great mysteries of the Grand Chase. Vindictive and thirsting for power, the boy whose true name he himself preferred to abandon is far from being a typical hero. 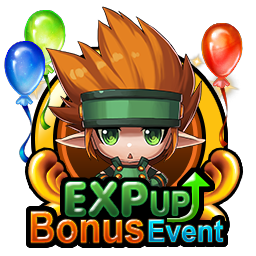 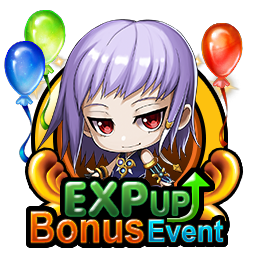 In addition, you can celebrate using a Flag and / or a Pillow from our two heroes!
Both are available for creation in the Forge for 10 Epic Essences each! 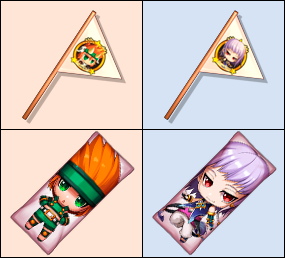 And there's more: Our beloved Druid is already an old character with a lot of outdated equipment. So, Ryan received some visual news! 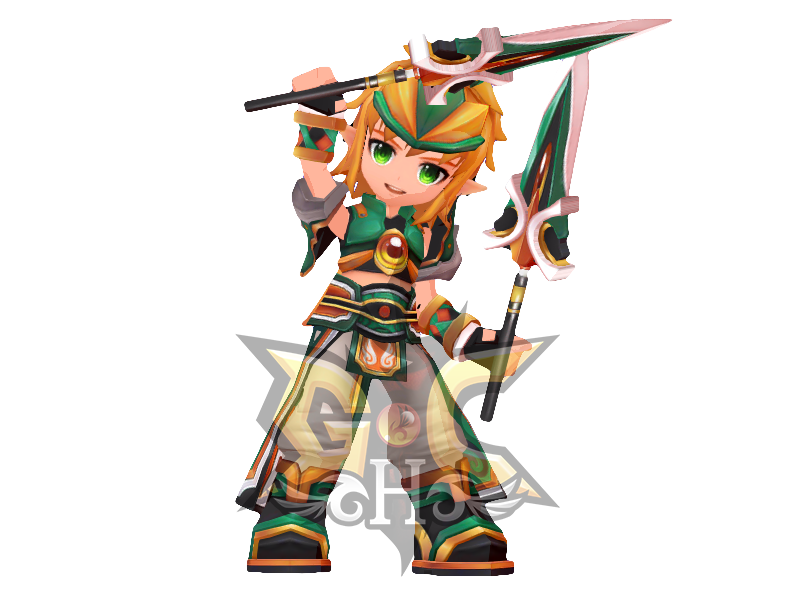 Visual Update on druid helm, axe of the druid and the new visual package of neo druid, respectively. 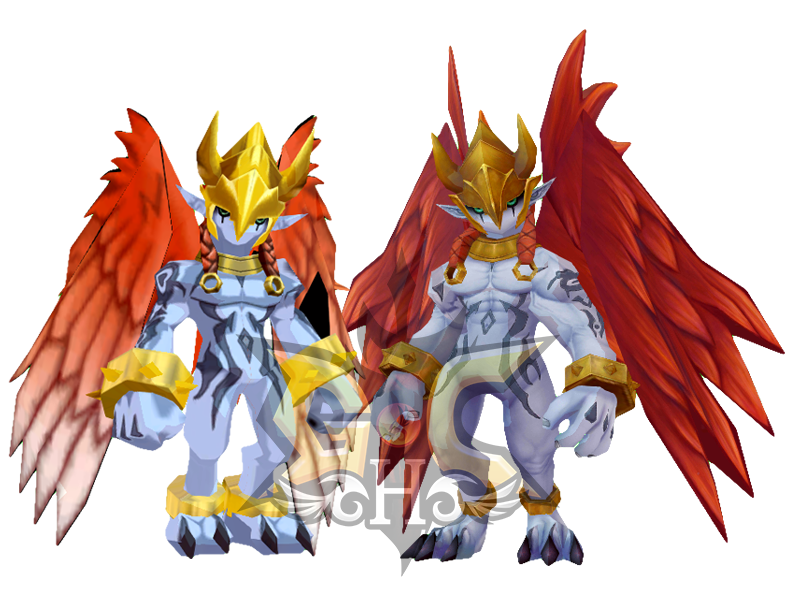 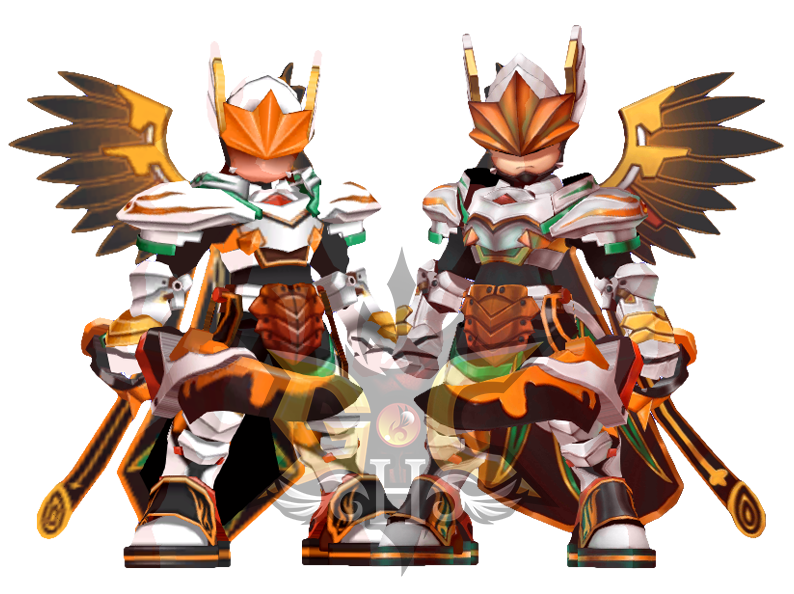 Has arrived in the server a system for customizing pets: Pets Costumes!!

To use the system, simply equip the desired mascot and click on the "Pets Costumes" button

You will be taken to a new interface where you can choose the desired customization for the current mascot. Do not forget that when you unequip your pet or equip another pet in its place, the customization will be unbalanced.

We updated our Lucky Gacha Fortune System (Premium Card). As with all updates, we will not fail to bring news to all of you! The system has changed and we are delighted to announce the Steampunk Exclusive Package and the Lesley Mechanics Mascot 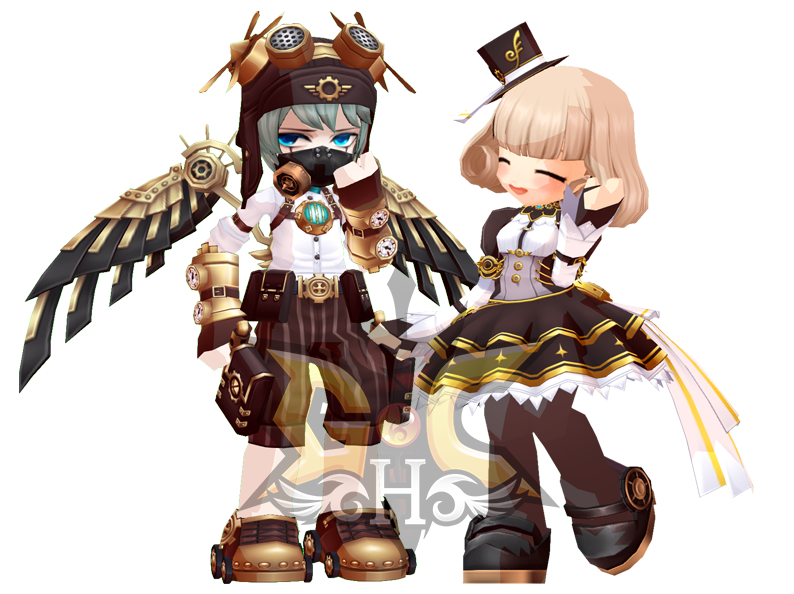 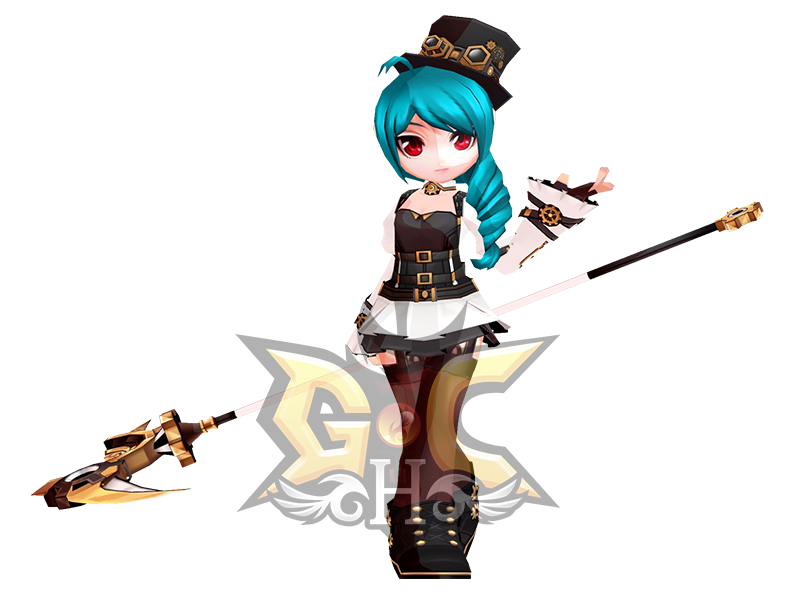 We could not fail to update our beloved system, right? The exclusive VIP table you find below along with the very illustrios Patriarch of Penumbra package for the boys and Matriarch of Penumbra for the girls as a maximum prize! Check the table below. 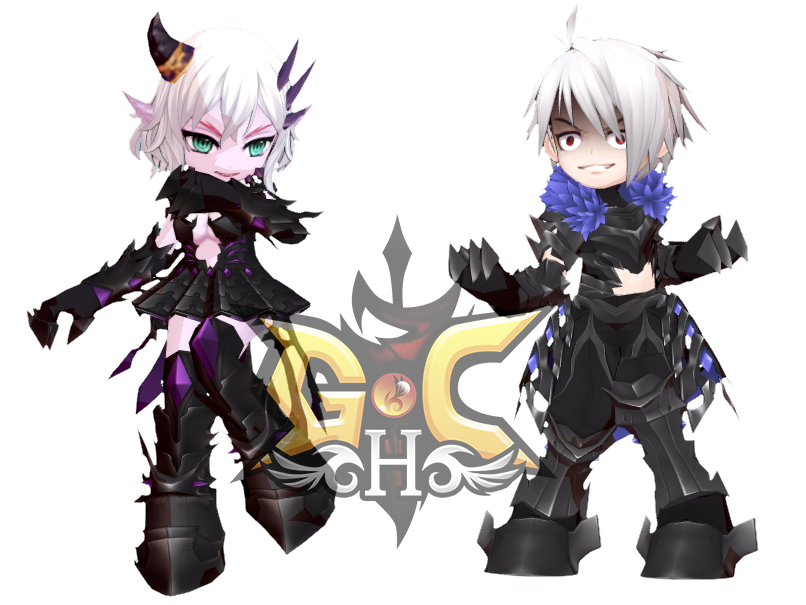 Package Matriarch and Patriarch of Penumbra for Ley and Asin, respectively.

When equipping the Penumbra Shield of Legendary status your character will make a new pose in the room, show everyone your sovereignty! You can also use this pose with any other visual, just equip the shields and the throne will be all yours.


Attention: Turning these shields into another visual will make them lose their unique effect.

Our Gacha Pon system has also been updated in this update with wonderful new packages. Rotate the roulette wheel and get the Praetorian Soldier and  Praetorian Royal Guard! 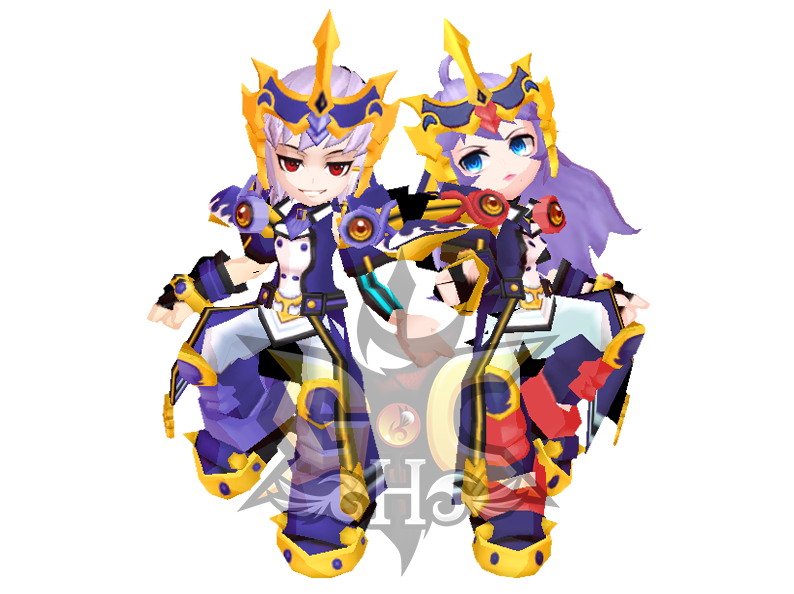 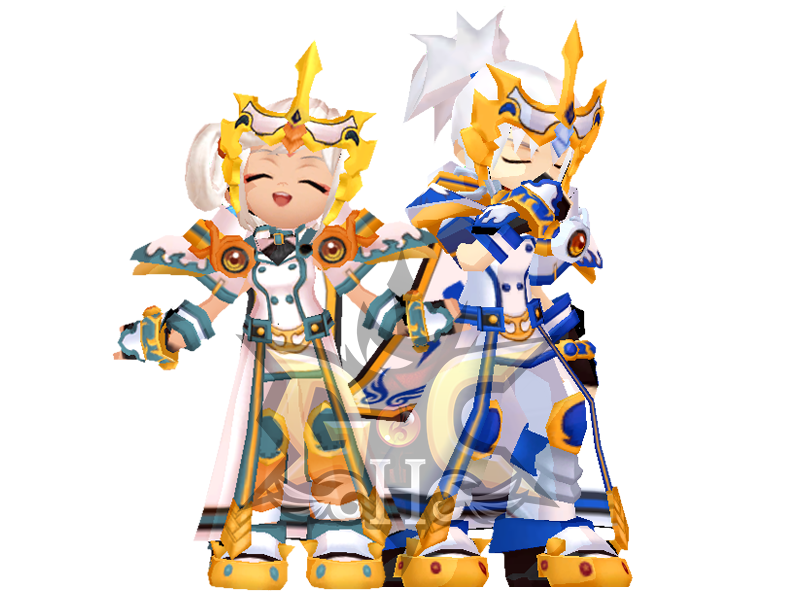 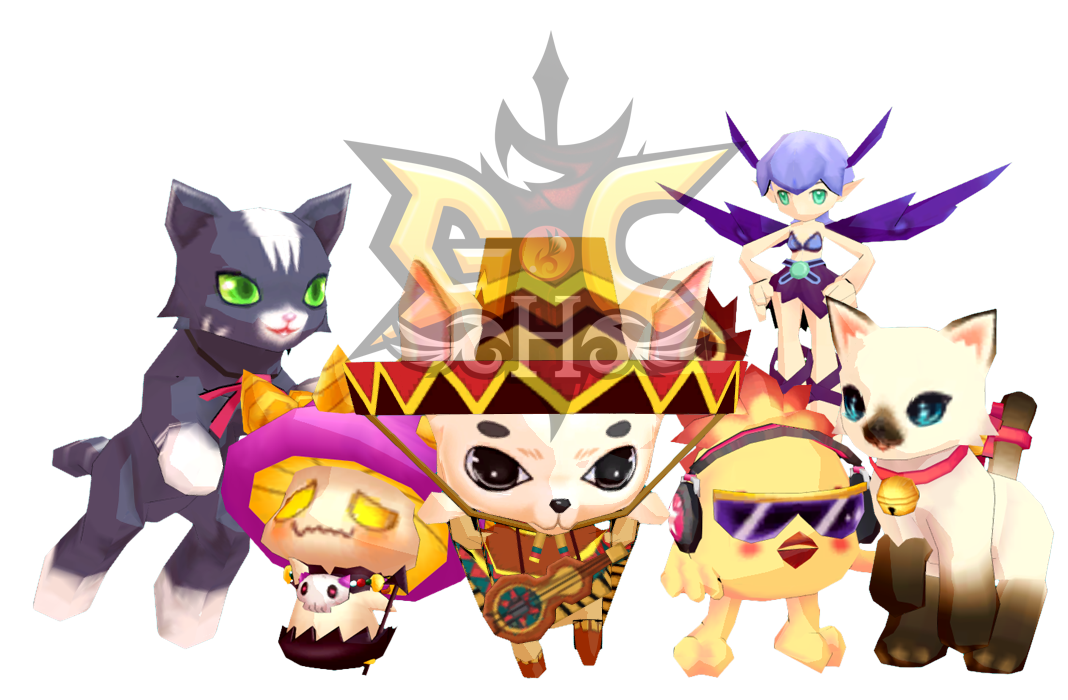 Skins available in this month's update in mascot customization chest 1.

K-Ching shop could not be left out, so as you all know, the K-Ching store is the special part of the world of Grand Chase; for years its innovations have been impeccable with wonderful items and it is following this line that we brought the special packages of Asin and Ryan to celebrate their birthdays and the glorious (and magnificent) PC package with their respective weapons. 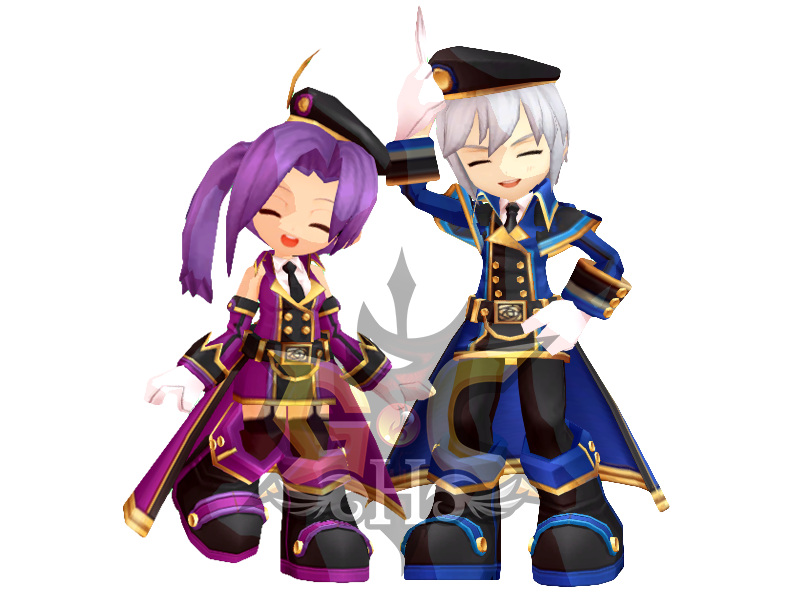 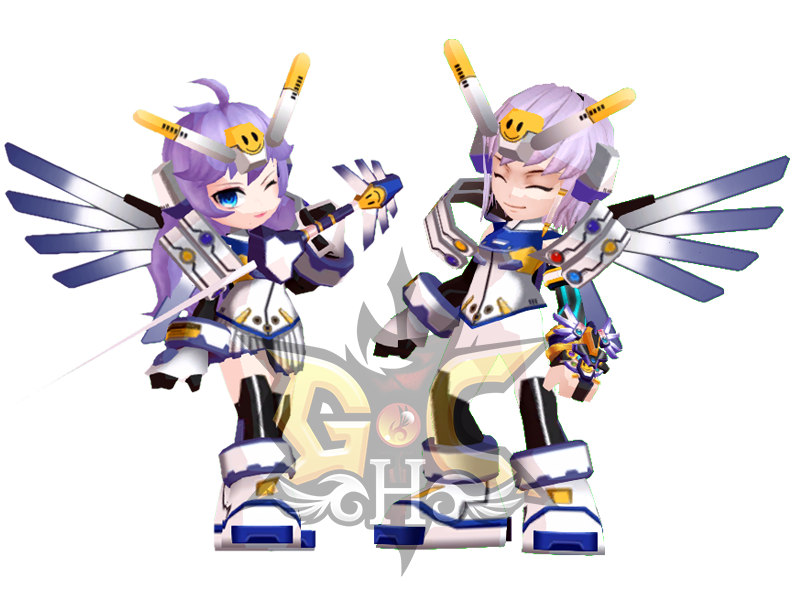 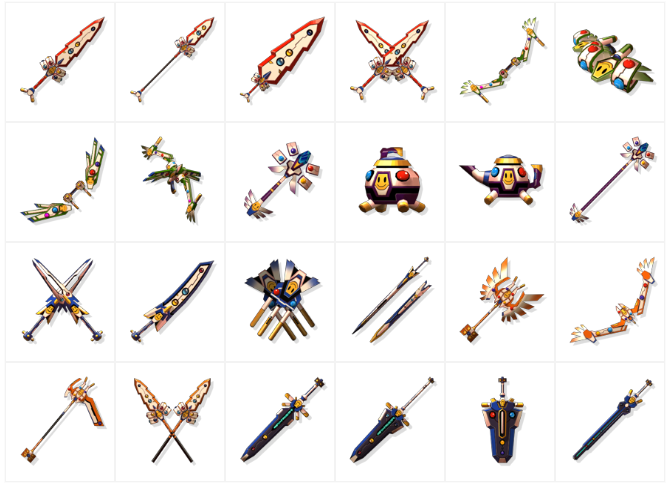 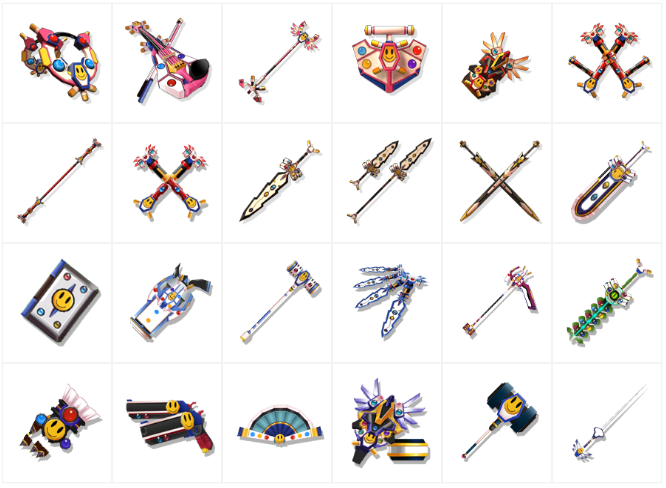 So much news!!! And the best part is that still more to see it, following with these notes of the May update, we also update the forge system on our server. With mastery and sincerity package will be availabre for a limited time so that you can build it and use it.

We also brought the asin, ryan cushions and their flags. 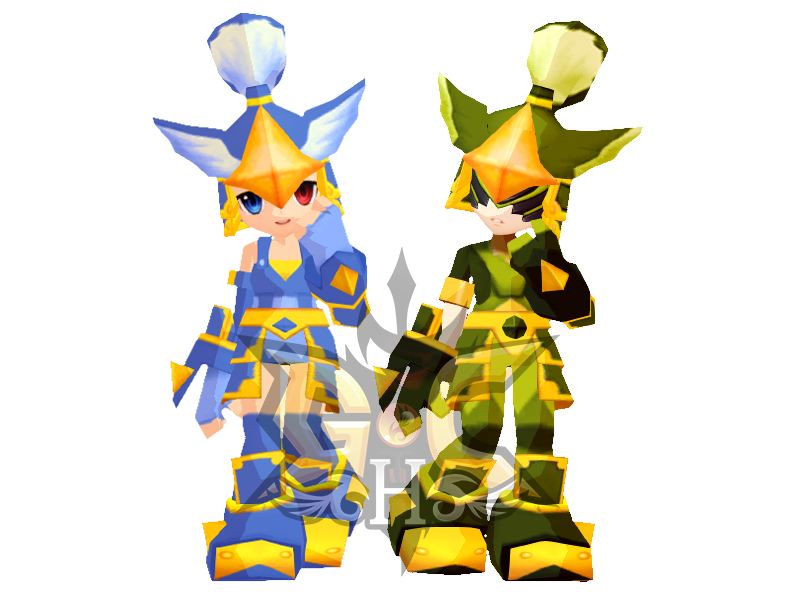 We are very excited to announce a new Rewards System in this update, the Ppiro Package and your Ppiro mascot! The little robot was always a pet forgotten in the past and we decided to give a little love to him with his own equipment ~ 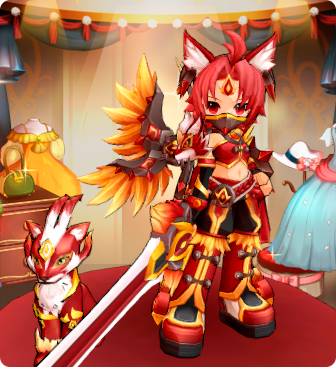 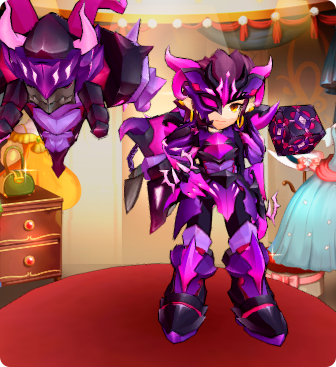 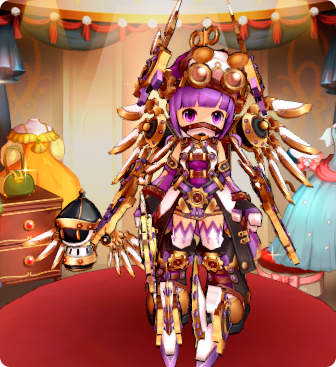 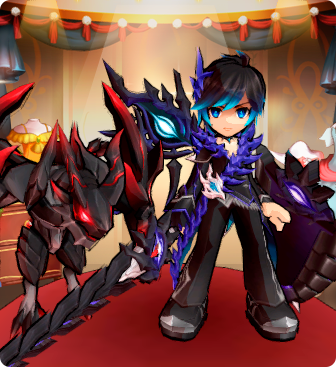 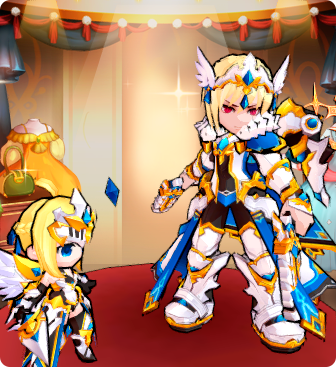 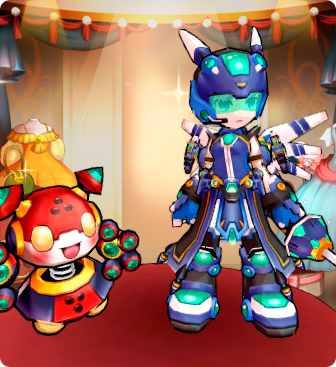 So for you enjoy the update as well, we active the event stamp for 7 days with wonderful awards. In order for them to be redeemed you will have to be active in the game, remmenber that if you do not log in respective day of the prize will be impossible to take it. So do not miss it!

Since the Rocco left the challenge forest and took refuge on eryuell island, home of Eryuell Elves, his hut is increasingly flowering and surrounded by fruit trees. Now he is in need of help to keep his gardens clean and organized, it seems that being a mascot is much more worth than being a mission chief, right? Who would say?!

To play rocco's tornado you need to use a Rocco's Tornado Coin. These coins can be purchased at the k-ching shop for 30 cash a unit or in packs of 10 for 300 cash.

Attention! Before playing you have to choose which character you will use, because some prizer are unique only to the character that is activated on the board. Each rocco's tornado coinsa allows you to play a round of rocco's tornado. Just click ''rotate'' button so that coin active his tornado and makes the slots of the items on the board spin. You can wait for them to stop by itself or you can choose to stop by pressing the button ''Stop'' on the right time.

When stop, your reward will be the one that board is showing. 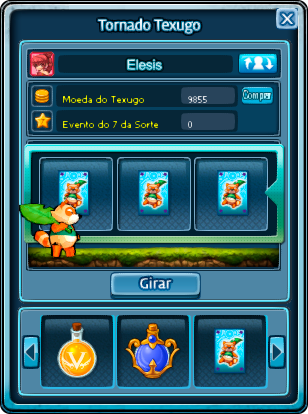 If you make the 3 slots match, you will receive the item as reward, but if the slots on the board didnt match your reward will be a Mysterious Potion (G). In adition you will receive a Lucky Point. When you complete 5 lucky Points, taking different pictures 5 times on the board, Rocco will activate Lucky 7! This mean the slots will turn into golden and it will be impossible to not to take 3 of the same in the slots of the next round of the Rocco's Tornado! In addition, the prize list is different when activing the Lucky 7.

Below you can check the items available on Rocco's Tornado:

Below you can check the items available in Mode 7 of Luck:

The last events of Ernas have moved the Relics of Kounat a lot, so the Magic Box arrives for you to enjoy it to the maximum and receive several prizes!
The Magic Box is available on the events tab.

In it, you will find a variety of items, which you can purchase by Ancestral Magical Stones/Kounat's Magical Stone. You only have to choose which of the stones you will use and spend them one by one until you reach the total equivalent to the chosen item!

The tip we give you is: if you use the Kounat's Magic Stones, there is a chance to receive your prize before even spending the full amount of stones needed!

See what fixes we have on this patch:

A round of applause for this little gallery that worked actively on this month's content!

@Bio, @Vinisims, @AChaos, @Vovo, @Amari, @Hagoromo e @pkdor who worked actively during the month so that the entire update and all its content could happen!